Mixing glass and wood for a contemporary look

Mixing glass and wood for a contemporary look

This job started off with simply looking at replacing spindles but turned into a much bigger and better finished product!

The customer wasn’t happy with her staircase which was constructed of old-fashioned ‘orangy’ pine. We had a couple of options:

Stripping the spindles wasn’t really an option because of the way they had been carved; it would take to long and be too fiddly. So we removed the spindles with a view to replacing them with new. 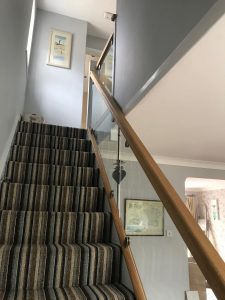 Meanwhile, the customer had seen a glass finish and liked this idea, especially having lived without spindles for a few days, which had really opened up the living area.

Finished result is a fab staircase, the safety glass is extremely sturdy and fitted into brackets which mould to it, so there is no chance of it slipping.

The only problem now is keeping it clean with the dog putting its nose on it!  Nice problem to have…